When you start a game company, you need to decide which engine you are using. This generally means you commit to days of discussing the pros and cons of Unreal and Unity, or some mobile framework. Turns out, when you build in web 3, you need to choose a chain. This has been an agonizing process of learning blockchains, experimenting, and long long conversations. Ethereum might be the reigning champ, but there are some serious drawbacks when it comes to tracking thousands of animated pieces.

For Box Rocket and our animation pipeline… it’s Solana.

I have been fire torched in discords and zoom calls for saying this. And so, here is my rebuttal to many of the people have told me that we’ve gone mad. In our opinion, if you are going to build a decentralized animation studio, Solana is the best one to do it on.

A hell of a rabbit hole…

We’ve kicked a lot of tires. I think you will agree, they are all – hard to learn, slow and expensive.

Let’s start back – way back.

I started following blockchains when I discovered blockstack in 2016. They are now called Stacks. What drew me to this organization was that instead of Bitcoin being a store of value, they were interested in lobbying it’s crypto-nature to build a platform. I even went to their first “summit” where I got to see superstars like Naval Ravikant, Nick Szabo, and Tezos visionary Arthur Breitman. (Link to Youtube)

The joke was, I had no idea who any of these people were at the time. I barely got any of this decentralization nonsense. I pretended to understand “the byzantine general’s dilemma” so I could hold my own at parties. I was an animator, what the hell was I doing in Palo Alto anyway?

Getting more serious, I spent dutiful hours on youtube coping solidity – Ethereum’s smart contracting language – I had no business understanding any of it. I read as many books as I could, trying one day after the next to understand this shit.

And… The first crash was reason for me to walk away.

Jordan’s rabbit hole journey got me to look again at blockchains. (Thank you Jordan) Long discussions about Bored Apes, and traits and PFP madness. FYI – We’re working on our own – (soon!)

But this time, for me, after being away, I really was interested in the true value that I thought they could be. I wanted to know if we could actually use them to track assets. By assets, I mean, the digital pieces that animators use to make stuff. I need a rig, an environment, a lighting pack — digital things in order to tell stories. For this essay, let’s just call these things “assets.”

Generally, blockchains are either expensive to transact with, or are slow. This has made them an insane choice for committing licenses and transactions for the movement of these digital assets. But now, I think they may be ready.

In sum up my background to this point, the books I’ve read have covered many areas of study from economics to math to computer science to political theory. My journey took me from Ethereum, yes, and then some time with Tezos (love Hic Et Nunc), to a long time with IPFS and File Coin, and finally…about 8 months ago… Solana. This has been a hell of a rabbit hole.

I started to… GET IT!

Solana is clear and straight forward, it’s designed to be a network that optimizes transactions. It makes no other bones about it.

We’re watching the ecosystem for how to behave. One network is using staking, another roll assigning, another lights up contract bounties. This is the formation of production capabilities in what are called decentralized autonomous organizations.

Blockstacks (stacks) is built on top of Bitcoin – it’s not native to it. Ethereum still has high transactions and so, to get speedy transaction we would need to use something like Polygon on Layer 02. Again, not native. I’ve not seen overwhelming evidence from “the merge” that transactions costs will be cheaper. I just think it’s in the architecture itself.

For us, Solana is Layer 01… or native. It’s designed so the programs are optimized, because the value of the network is speed. The ecosystem has the potential to evolve into entertainment and media, as well as being accessible to social media applications (low transaction fee and fast). Imaging facebook interface banking, with automated production networks across the world. That’s the web3 that we’re probably headed to.

So that’s Box Rocket and our angle on Solana…

Distributed asset licensing, but with all the great storytelling assets of an animation studio. Imagine if we animated something like this short test we made, but all the assets within it could be licensed and used? What would the community build with it?

Wait – What about Solana Hacks?

Check again, in the most recent, Layer 01 was fine.

And honestly, I’m betting on the network having more outages as it grows.

I admit, it may be weaker, but the focus is speed.

The tooling for using the Solana network is being built under our feet. Phantom wallet has beautiful UX which makes it easy to onboard. Squads (a start up) let’s Jordan and I set up a multi-signature contract on-chain. Solsea has been a great way to prototype mint collections. And increasingly we’ll see email, chat, sharing, locking — all cryptographically secure. The start ups are everywhere. The space is exploding.

The tools, which were before only accessible by programming, are becoming webapp interfaces, where savvy animators (with some web3 know how) can potentially govern their own deal making.

This was the pull I had to blockstack years ago. I believe in web3 building communities because we must control our own data. Solana has taken this ethos of user-owned-data that grows strong in these development communities, but has also created the marketing vibe of a software focused world. The purple glows, the sleek reveals. It’s “Apple of Blockchain.”

For us, as an animation pipeline, we just need to focus on the workflow, those interoperable animation components, and solana will do the rest. It’s all there, and the tooling is only getting better. The opportunity is immense. We’re so pumped.

For all the many future animation systems that lie within this thing we call “the metaverse” – you need speed. We’re so big on Solana. The community is perfect for us. Clearly, much is yet to be determined. Who knows how the space will evolve. Will regulation shut it all down? Should be a bumpy one!

And hey, you should come with us. I promise it will be fun.
Get a phantom wallet in 5 minutes and jump in. Watch this short video I made if you need help.

Ready to blast off with Box Rocket?

We’d love to hear from you.

I’m a creative who is crypto curious… 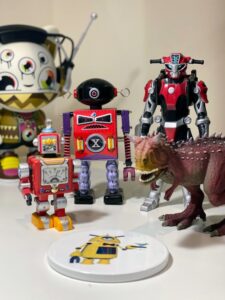 Two Robots Walk Into a Bar…

What are Crypto Native Characters? 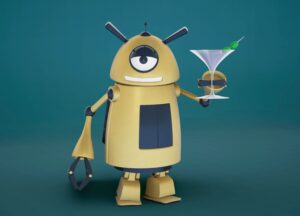